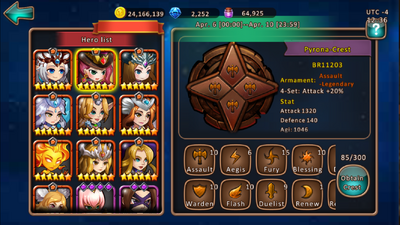 Crests are a way for you to customize which Heroic Abilities you want to emphasize for your Heroes. Crest components are acquired via the Purgatory Stages.

Each character's crest consists of 4 pieces which point up, down. left or right. Collectively, I'm calling this the "Crest Rose" as it looks similar to a Compass Rose on a map.

Those pieces are inserted into the Character's crest. When all four pieces are of the same Crest Type, the hero will receive a set bonus based on that type.

When you select a Crest Piece from the inventory, you will have 3 options as to what to do with it.

There are several types of crest pieces which can be used for form your Hero's crest. These include:

Crest Pieces are ranked in power according to their star level (

), their Level (+0 to +15) and their Quality (Common, Fine, Rare, Epic, or Legendary). While the star level is dependent on the luck of the draw in the Category:Purgatory Stages or Crest Chests, you can increase the Crest Level and Crest Quality through the #Rank Up process.

First a word about Crest Essence. Essence is required for ranking up your Crest pieces. The best source of Essence is through Crest Chests and other Event rewards. You can also obtain it by Dissolving unneeded Crest Pieces.

It takes more Essence for each level you're trying to add to a Crest Piece Rank. It also requires more based on the star level of the piece.

The option to Rank Up a Crest Piece is available whether the piece is in your inventory or embedded in the Hero's Crest Rose already. It requires an escalating amount of gold and Crest Essence for each level up from +0 to +15. Also, keep in mind that you only have a chance to rank up each time you spend the gold and essence. It is not a guarantee.

You can also choose to spend Diamonds to rank up your crests. These seem to be more successful, however it is still a random chance; so you could spend the Diamonds for nothing. For that reason most people don't bother with that option unless they have deep pockets and are very close to a goal in their crest progression.

When using the Rank Up function on a Crest piece, you have a chance to improve it to the next level. This chance varies based on the star level of the piece as well as what it's current level is when ranking it up.

Every three levels, you have may have a chance to upgrade the Quality level of your Crest Piece. The chance of that succeeding varies depending on the current Quality of the piece. Below are the chances of increasing Crest quality during improvement.

You can select an embedded crest piece in the character's Crest Rose and choose to Remove it. Removing the crest will cost Diamonds however. The higher the quality of the crest piece, the more diamonds it will cost to remove it. For this reason, you should carefully consider your choices of Crest pieces and avoid embedding a piece just because you have it and the Hero has an empty slot in their Rose.

From time to time, GT Arcade has run in-game Events which have reduced the cost of removing a crest piece to zero. This is an excellent time to re-specialize your Heroes.

Dissolving a crest piece provides you with Crest Essence to use in upgrading other Crest pieces. The higher the quality and the more stars that the piece has, the more essence you will receive. If you have leveled up the piece, it will also refund a (small) portion of the Gold you used to upgrade the piece.

You can only dissolve Crest Pieces which are in your inventory. Meaning that you have to Remove an embedded crest piece before you can dissolve it.

I often seen questions about "What's the best crest for XYZ hero?" There are a few common rules that apply for most heroes.

You can also decide by your actual aim. For example, if you want to be the king of Wharf boss fights, it is highly recommended to assign Duelist Crest to your AoE Heroes. Have you ever seen a Summoner with that?

You should also keep in mind some limits, like Blessing Crest (team HP buff) is fine on a hero, if you got only one in the team. However, hence that shared HP won't stack, additional Blessing Crests are wasted on your team. Also, Crit damage won't do anything special with your Healers (myth). Zweihander and other similar heroes should be fine with Aegis for the personal HP buff.

You should also keep in mind that a Duelist might sound like the best option for a hero with high attack but that might not take you much further if you're fighting enemies with similar levels of Attack skills (e.g. PvP). Duelist works great for boss fights and against some tanks, having rather low attack (e.g. Night Sentinel vs. Elder Dwarf). You may think this makes it a good choice for your tank buster type characters (e.g. Pyrona) however, pay attention to the frequency and damage done by critical hits. Maybe a crit based crest can be even better?

Assault is good, but might not the best, choice for many hero types. Some (like Void Shadow (aka Doom Envoy), looks rather fine with it.

Resistance based Crests are good for tanks who rely a lot on Parry (e.g. Valkyrie, Death Slayer, etc.).

You shall also keep in mind that while some Crests looks cool for a certain hero Runes and basic values, but a corresponding Crest might not improve their Skills! For example, you can assign Attack or Crit based Crests to Jack Hallow, but I'm pretty sure he can do much more with his special skill - which is based on Agility value.

Retrieved from "https://leagueofangelsfireraiders.fandom.com/wiki/Crest?oldid=15030"
Community content is available under CC-BY-SA unless otherwise noted.