Edit
watch 01:36
We're Getting Mutants in the MCU - The Loop
Do you like this video?
Play Sound

There are 70 Heroes in League of Angels: Fire Raiders (Update 31/12/2016). Players need the best Heroes to become more powerful. After players complete the starter quest, they will receive a starter team of heroes which are all 1-star. This doesn’t mean though that they are weak. These 5 Heroes can help players to quickly upgrade the league and earn their first bucket of Gold. If players want to challenge instances, get a better rank in the Arena, complete higher level in various Trials, drawing cards would be the way to go. By Drawing Cards, players can get powerful 3-star Heroes and lots of Soulstones. Collect enough Soulstones and then unlock the corresponding Heroes. It is a good idea to get Zweihander, Grimbow, Night Sentinel and Djinni which are all 3-star from the Arena as quickly as possible.

At the very beginning of the game, a team of Rose Knight, Pyrona, Atalanta, Nether Knight and Green Ranger is a great help to the players. Then players can replace them one by one with even better Heroes . As has already been mentioned above, players can get Zweihander, Night Sentinel and Djinni which are all 3-stars from the Arena Shop. They can be used to adjust the player’s formation. Since it is quite difficult to get Heroes, it is a good idea to place a tank in the frontline and those that cause a lot of damage  to the rear.

For example, players can place Zweihander and Rose Knight in the frontline and Pyrona , Night Sentinel and Djinni to the rear. This is most common way of doing it. After players get more Heroes , they can create their own distinct formations, such as Control Formation, Damage Dealing Formation and Stalling Formation.

When Heroes wear a complete set of equipment, they can be promoted to the next level.

The order of promotion for Heroes is:

Players can promote Heroes to enhance their fighting capacity. When they don’t have enough resources at the beginning but players still have to promote lots of Heroes, it is recommended to promote those which cause a lot of damage so that players can upgrade quickly and get more resources. When there is a higher star level Hero in the team, make it the top priority to increase the team’s force overall.

In League of Angels, each Hero has 4 skills. A fifth skill is unlocked after the heroes has been awakened enough times. Common Heroes have the first skill which is called as “Ultimate Skill”. Seize the opportunity to cast the “Ultimate Skill” in battles and then players can effectively clear the instances, especially more difficult ones. At the very beginning, players don’t have enough Gold. It is recommended to use resources to enhance those that cause a lot of damage so that they can be as effective as possible. Later on, players will come across monsters with more HP in higher level instances. To get more time to cause damage, players need to upgrade the tank’s skill on the frontline. Balance is the key to success.

Heroes obtained from the system or Drawing Cards are not 5-star. There is still a long way to go. Advancing Heroes is very important to increase the team’s fighting capacity. Resources are not always enough in game. Players should advance the selected Heroes first to get the best in the same stage. At the very beginning, players should advance those that cause a lot of damage first. Then they can effectively clear instances and score a victory in the Arena. Zweihander would be the first choice since he is powerful and it is easy to advance him. Of course, Djinni and Night Sentinel, who are obtained from the Arena, are also good choices.

Only drawing cards and elite instances can help players to advance Heroes . When players clear the corresponding elite instances, they can unlock the instances and get Hero Soulstones. If players use Diamonds to Draw Cards , they can receive Heroes and Soulstones even quicker. 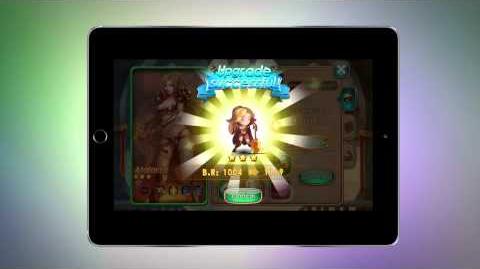 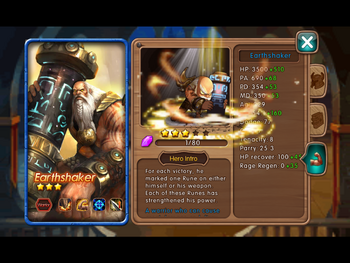 A team’s fighting capacity is closely linked to the participating Heroes’ level.

At the very beginning, players don’t need to use lots of resources to upgrade the starter team of 5 Heroes. When they get the first powerful Hero that they decide to use, they can focus on the target and upgrade the selected Hero’s level and quality as quickly as possible. When players have lots of powerful Heroes but not enough resources, the player can focus on the key Hero first.

Upgrade the higher star level Heroes and the key Hero of the team as soon as you can.

Below is a list of different methods to increase your Heroes Strength.

Community content is available under CC-BY-SA unless otherwise noted.
Advertisement