"Who's ready for some mischief?"

A mysterious and cynical figure, Jack Hallow loves to spread evil wherever he goes. Don't fall for his Trick-or-Treat, it's always a trick. His hobbies include collecting souls, candy, and pumpkin pie.

Use on Your TeamEdit

You can either use him in your front line to gain rage as soon as possible, or place him behind defenders. If you choose the first option and you have Holy Keeper to revive him, put him in your 2nd spot - otherwise any slot will do.

Placing him behind is an especially good idea if you have the full Polar Ice Relic set. Polar gives jack additional attack and agility (and rage). By maximizing his agility Jack Hallow can do pretty serious damage as long as he survives.

Like all characters, our Jack Hallow also has weaknesses. He is not a tank and you can stun, silence or even kill him easily since his dodge and other defenses are weak. Characters with high dodge or parry skills (e.g. Valkyrie, Rose Knight, Elder Dwarf, etc.) can often avoid his attacks and manage to do enough damage to kill him off.

Soulstone only drop from Events. 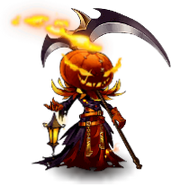 Add a photo to this gallery
Retrieved from "https://leagueofangelsfireraiders.fandom.com/wiki/Jack_Hallow?oldid=15578"
Community content is available under CC-BY-SA unless otherwise noted.