Start a Wiki
Separating hell from the mortal world flows an eerie, bottomless river of death known as Styx. The guardian of this river, Angel Styx, prevents hell’s demons from unceasingly tormenting mortals and keeps creatures from unwittingly entering hell’s evil gates. A quiet creature, few know her true power but that won’t be the case for long. The dark gods have become increasingly careless and allowed torrents of demonic souls to torment the living. Thus, Styx has stepped forward to aid the light in bringing balance back between the demons and the living. 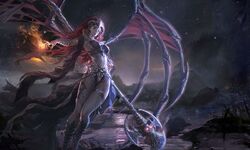 Use on Your TeamEdit

Styx is one of the Angels who is good on low level and will stay useful even after your League Level goes past her max level of 80. Her stun and HP decrease skills are useful in almost all kinds of quests, bosses or PvP battles. Actually, it is difficult to beat Demon Invasion battles without having her in your team. You also welcome Styx in the Purgatory Crest quests when you lowering the enemy's max HP or stunning some opponents may keep your team alive.

Styx is also handy in PvP battles but, unfortunately, there are higher level Angels who offer better Angelic Auras to give higher boosts to your Heroic Abilities. However, you can improve her aura and the buffs it gives by using some Angel Gems in the Angel Advance feature.

Skills are active abilities which the Angel will use in combat once she's built enough Rage to do so.

Auras are passive buffs which apply to all heroes deployed on the team that the Angel is supporting. 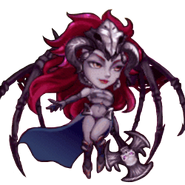 Add a photo to this gallery
Retrieved from "https://leagueofangelsfireraiders.fandom.com/wiki/Styx?oldid=16018"
Community content is available under CC-BY-SA unless otherwise noted.